About a month a stray dog wounded up on my lawn. My guess was a Shi Poo mix. Maybe miniature poodle. Poor little guy was skin and bones,starving,hair was matted. No collar, hair was about 6 months long of no haircut. He is friendly, and very hungry. We fed him with our dog food. I was unable to drive due to surgery but a friend of mine was over with her husband and they took him to animal control. He had been on my mind all that week thinking how could anyone not post pics, around neighbourhood, kijiji,London Free Press and leave this little guy out. I called Animal Control , they gave him shots, said he as neutered and about 9 years old.
Said chances of adoption were slim because he is a filthy stray and older.
I couldn't bear him being Euthanized.
I figured I am home since i am sick. Why not give him last years of his life a loving warm home with food and water. The dog would have died on the street, and chances were high not to be adopted because of age etc.
Yeah I am a softy and no I cant save each dog. But this dog landed on my lawn. I prayed on it, spoke to the wife. We brought him home tonight. Animal Care and Control waived all fees, gave us a licence and handed us the dog and thanked us.
Introduced him to our Lab/Sheppard mix Bella and friends from get go. Little guy has been wandering around, sniffing things. eating well. 9 am app with groomer to get shaved(pee you he smells) and go to vet for double check, and determined he is a Bishon Frise.
He has been back to vet a few times and vet said he gained 3 lbs and is doing very well as we saved his life.
When we first saw him and he was at animal control. His tail was down dragging. Now its curled up, he is panting and happy. He has been home with us now just over a month. His name.....its Buster!
I did not rescue him. He rescued me.
You can tell from the photos where he was how we got him and now....I could not imagine my life without him. 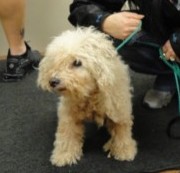 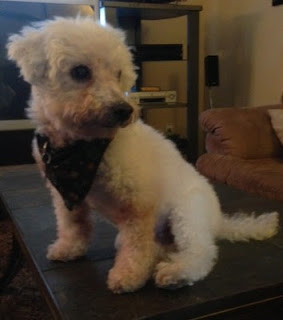 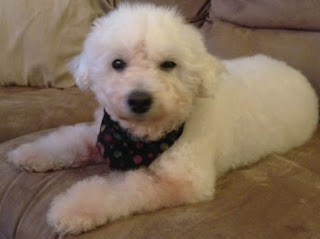 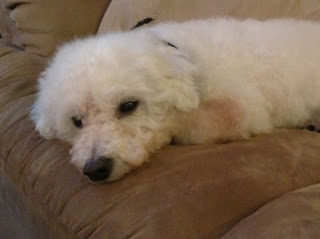 Posted by ClusterHeadSurvivor at 7:24 AM

Email ThisBlogThis!Share to TwitterShare to FacebookShare to Pinterest
Labels: He rescued me-Buster