Everyone has childhood memories. Most of us treasure them more than anything. For me my memories that are dear to me are from age 4 to age 12. I grew up in a middle class working neighbourhood. Maybe even just a tad upper middle class. We all had large homes, big garages or pools. No kid I remember went without. We all had BMXs and anything we wanted basically.
We grew up with Happy Days, Dukes of Hazzard,Mash,Hogans Hero's just to name a few.
We beat each other up and hugged 5 minutes later. I don't recall anyone hating each other and if we did, by the time we hated the person we had already forgotten why we were mad.
We built forts, stole matches, burned ants with magnifying glass. We talk about girls but never did anything about them or to them. We played outside from morning to night and getting heck when we were late. A $1 dink car (Hot Wheels) added to a collection made hours upon hours of tire squealing on the carpet. Under the couch was a make shift garage and we practiced racing and the other kid was always the winner in a carpet race. Each car would barrel down the carpet for 8 inches and then fly into the wall. Out homes had laundry shoots and we would throw our toys down the shoot to have our moms  get mad from the metal pinging in the dryer as the hot wheels car flew out of the sheets.
We would beat the pulp out of each other at recess and then sit side by side in class and tell jokes.
We were the first generation to have video games. We had pong and then I had Colecovision. Another kid had Atari. And another Nintendo. It was awesome. $1 would buy us an afternoon at Macs Convenience store as $25 at Pacman would last 20 minutes and the rest spent on candy and jub jubes. We rode out bikes like the Hells Angels with  pack leader up front and felt invisible. But we were afraid of our own shadows.
Some kids I never saw there parents. As they all worked. Sometimes I only saw some parents as the kids got heck for doing stupid stuff. Divorce was almost unheard of. So was being sick.

Yesterday I drove through my old neighbourhood. Down my old street. As I drove past friends houses, streets, my public school and eventually up to my childhood home, I wept. Badly. I had driven past this neighbourhood a thousand times. And missed it very much but this time was different.

Uncontrollable tears poured down my face as I thought of .........Rick,Nooner,Neil,Adam,Pickle,Browner,Art, Marcelly, and many more. My old school, the memories of me whacking my head with a paddle playing tether ball. Jumping ramps with our BMX, going in the woods building forts only to have older kids trash it. My parents having parties and swimming in the huge pool we had. I miss those days so much.

I cried because......as of late, My memory loss is getting much worse. My wife stated that I should write things down. There has been no documented long term side effects to cluster headaches so I been told but my GP and neurosurgeon both concur that ongoing going trauma to my brain with attacks is causing my short term memory loss. I am going for memory testing soon. Its actually scaring the living crap out of me. Memories like this I cherish so much. Today's friends bailed and didn't even show up to visit me in the hospital. My childhood friends grew up, moved away. Although we don't keep up, when we do, it was like childhood was yesterday. I love every single one of them and miss them all very much. Loyal, compassionate giving friends. The movie "Stand By Me" reminds me of all of them. Watch it sometime....true classic with shelf life.

My memory loss is short term. Recently I left to go to Canadian Tire, local store I love. Its 1 km from my house. By the time I got there, I had no idea why I was there or what I was there for. I had to call my wife. I forget things going to the basement and when I get there I don't know why. But funny, I can remember this story 2 weeks later. My memory loss is short term and bad. Scares me it will turn to long term.

Id thought Id share some childhood memories. This blog is or was a very private intimate detail of my life but glad I can share with people who can relate and ponder their childhood before being sick.I have more memories and when I lived in BC before I was 4, I remember some of that too vaguely. And more memories after I was 12. But those particular years mean the most to me. No responsibility. No one suffered(that I was aware of), No one went without (food and shelter), and no one was sick(as kids).

I often think how I would have lived knowing Id be sick one day as an adult. Would my childhood be any different? Most likely adult hood doing more brave and daring things. Id pick better adult friends that's for sure.  But childhood I wouldn't change a thing. I hope I gave my son as good as childhood as I could of. Memories are an amazing thing. The child inside of me is still very much alive. Its the adult in me that is crying and in pain but the kid in me is smiling.

(my house and me jumping ramp at Ricks cottage....thought I was Evil Kinnevil.) 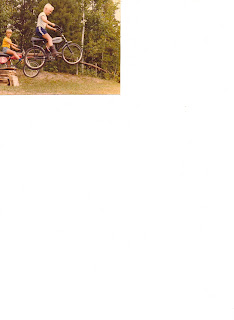 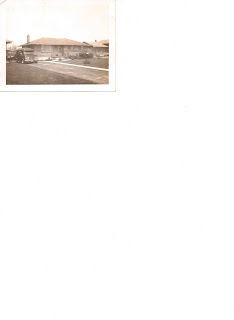 Posted by ClusterHeadSurvivor at 6:48 PM