I know I talk alot about Michael J. Fox and him being my hero. Aside from my wife and son being my hero's as well. But its different. Mike is a philanthropic hero. For someone wanting to go out of business I admire his ongoing relentless will , drive and desire to fight.
His actual real name is Michael A.Fox. He changed his name for show business.  Either way. Mike Fox holds a place deep in my heart no other male persona can or has.
I know I am a gear head and mention many times about meeting my iconic car guys Jay Leno and Tim Allen and they both are philanthropists in their own way but Mikey far superseded any famous person on the planet.
Mike and I share some similar attributes. Both Canadian and proud. Both lived in BC and Ontario.
Both sick,both Back to the Future Fans. Both have super hot wives and wives that stick beside us.
And both of us think outside the box. Never giving up and spreading awareness and hope.
I can only dream of being more like Mike. He inspires me everyday to continue to fight, move forward, be positive, optimistic with a hint of sarcasm's in his humor. He has far superseded what he told his drama teacher to be cute just long enough....

"Lucky Man" his autobiography, changed my life. My way of thinking. I realised that being famous means nothing. Disease don't affect the poor like me only and nor did Mike wake up one day and get told, 'Oh Mr. Fox, you have PD. Oh, OK cool Ill go start a foundation an raise 313 million and counting. Nope, wasn't like that. Mike went what we all sick people go through. The 5 stages of denial, bargaining and more...Mike is no different than anyone else who finally comes to acceptance. Took him same time if not longer for him to be whom he is today. Everyone illness is different. If you have PD. CH, Lou Gehrig's. Doesn't matter. The title of disease may be the same but the cause and effect is different for everyone. How everyone deals and accepts it is different as well.

What I learned in Mikes book. Please buy it as 100% net profits go to Michael J Fox Foundation.
Is that he grieved, denied, hid the disease just like me. Mike as rich,brilliant,talented, and funny as he is went through it all. His book taught me to look outside the box and to know its OK to be sick.
Having CH and his description explains it best. Sorry Mike but this analogy you use, best suits my attacks." Having CH is like standing int he middle of the road with cement shoes and the bus is coming. You know its going to hit you but you don't know how hard". I use that analogy alot. Because having CH you never know how hard and how bad the attack is going to be. I could think of a better explanation to describe an attack coming.

I read his book and being poor and sick it inspired me. I thought I cant buy a bunch of his books and mail them to people. I am broke now. So how can I help. So. I started a 'Pay it Forward". I wrote an inscription on the inside cover. I had been in correspondence with someone in Vancouver that is sick like me. She needed uplifting words of encouragement. So I mailed her the book. Asked her to read it then make a donation to the Michael J. Fox Foundation and then mail the book to anyone else sick. They don't have to have PD or CH like us but anyone sick. I hope the book travels the world and Mikes foundation receives some money. Last I heard it ended up in Georgia. Don't know where it is now.

I have so much heart into Mikes cause. My son and I ave raised money for Parkinson's by going on a walk for Canada. I have bought several books of Mike and donated them. Made donations to MJJF.
I do this not just because I am a student on Mike Fox. And not just because finding a cure of PD is important. I also do it because of his foundations ongoing support in research. Inadvertently the surgery I had. Deep Brain Stimulation was founded by a Canadian Doctor in Toronto. The Michael J. Fox  Foundation has raised millions in research for DBS. Deep Brain Stimulation is primarily done for Parkinson's patients. Now it is being trialed in depression, cluster headaches, turret's, and many others. I owe so much gratitude to Mike.

I have seen Back to the Future well over 200x. Probably closer t 400. I can recite half the movies lines in my head. As Mike says....has excellent shelf life. And I grew up watching Family Ties and loved Spin City and all his movies. I was fortunate enough to have nose bleed seats hearing him speak here in London Ont November 21, 2011 at a benefit. I would have loved to shake his hand and thanked him. It was an honor to be in the same room as him.

I will continue to endorse the foundation and its efforts. As I am planning my book that I am writing. and when published....(someone help me) I will donate 25% net profits to his foundation. And yes I will keep watching BTFF.

I highly recommend reading "Lucky Man" and his other books as well. I have learned so much from Mike. You never hear him complain, whine about being sick. He rolls with it. He is positive, inspiring, optomistic and encouraging. I can only aspire to be more like him. I am dedicating this blog today to him. I encourage you and everyone to donate to the Michael J. Fox Foundation.
www.michaeljfox.org
please give generously and or get involved. 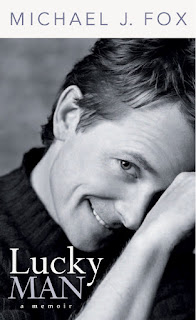 Posted by ClusterHeadSurvivor at 9:17 AM

Email ThisBlogThis!Share to TwitterShare to FacebookShare to Pinterest
Labels: www.michaeljfox.org