Never miss an opportunity to be great

Had I given up, none of this would have ever happened.


I would not have met my wife, had an amazing marriage. some very light travelling and sharing may wonderful moments with special people.

I don't show this to gloat but as an effort to give others meaning and hope. not just based on this photo but the photo would have never have happened if I gave up.

I take every opportunity to educated and create awareness for an invisible disease no one has ever heard of. If it shines a light on us for a nano second to get people talking then it was worth it to me.

I could have easily never mentioned anything. Now more people know....

One more person educated on Cluster Headaches is one less survivor living in fear.

Thank you to a fellow Canuck who gives his medicine (the best kind) through laughter, Russell Peters 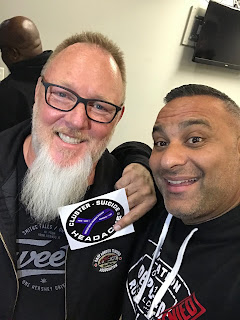 Posted by ClusterHeadSurvivor at 7:25 AM