I have had some great success with awareness and advocacy in the last 11 years of being sick.
And some might ask why tell a celebrity who isn't sick about a disease they never heard of? Its the same reason I tell average Joe's about Cluster Headaches. Except celebrities have the ability to reach a greater audience than I ever could. And I will explain that a a bit further.


Every day, I make sure I tell someone and educate them on Cluster Headaches in some form or another. In person, on line. Whatever I can do I educate at least 1 person a day. Some times I am very lucky and have a celebrity back me up with a re tweet or facebook posting etc.

At some point in a celebrities life they are asked to get behind awareness projects or they have a personal connection with a disease because of a friend or family member.

Michael J.Fox (my hero) long before his Parkinson's used to be a spokes person for Spina Bifida.

Some celebrities choose to suffer in silence or alone. Numerous people have reached out to Daniel Radcliffe for support with CH and every person I know including myself has been turned away or ignored. That is ok. No one has to be like me. It could also jeopardize their career as well.

I will share my success and tribulations with awareness.

I don't exactly remember who I started my awareness with and celebrities but I am pretty sure it started with Tim Allen. I met Tim in Niagara Falls in a private meeting. I didn't mention so much my CH at the time because I was start struck and being a car guy it was really incredible to have met someone I wanted to meet for 20 years. He was really kind, and humble. Because he had his grandmother live here in London their was some sort of kin ship I guess. After meeting him I regretted not advocating the disease more. I had not yet designed the decals so I had nothing to give him neither. Despite my desire to meet Tim Allen and Jay Leno. I am not really at all an autograph hound or collector. I am just a gear head and love cars as they do. The second meeting with Jay this past April. This time I was able to give him a lot of literature on Cluster Headaches, decals, pamphlets on ClusterBusters and what we do. Jay Leno is 100% aware what cluster headaches is.

I think if memory serves me correct I had Jeremy Bieber, Justin Biebers dad tweet me a happy birthday and suggested supporting cluster headache awarness. That was funny because his dad has over 2 million followers and I had girls tweeting me for over a year. Despite what you think. It got great awareness. Justin Bieber was born here, same hospital as my wife and son. His dad suffers from Chronic headaches. Not Clusters.

In Feb 2012 I won a contest to meet Lisa Marie Presley at Graceland. I never thought for a second Id win....so when they called I said wait I cant confirm give me a bit. I have to reschedule Pre Op. As I was having my big brain surgery. I was able to move the appointment. Well when we got to Graceland (my 2nd visit there, my wife's 1st), we were met by the director of Elvis Presley Enterprises Kevin Kern. He mentioned it to Lisa. Next thing I know. I am being interviewed from the Memphis Chronicle, Jim Sykes from Elvis Sirius radio and then I did an interview on Reuters out of Nashville which got published on over 400 websites. Lisa Marie caught wind of my upcoming brain surgery and took special care and time with us 3x that day to talk to us, meet with us and photos etc. I also ended up friending Marian Cocke, Elvis's nurse. Here is the article Lisa Marie Presley and me

Once Jeremy had tweeted me that it got me thinking about celebrities, what they do and how supportive they are and how much it helps. As much as I am well known in the CH community I am a no one outside of it. Just a gear head to others. No matter how much I yell and scream for people to listen my audience is small.

Alan Thicke is a Canadian from northern Ontario. He went to school here in London. And has a wing at out University for diabetes. I wrote to Alan and gave him a decal. Never in my wildest dreams did I think he would email me a pic of him and the decal. I was so proud of that. I like his TV show Unusually Thicke. There is an episode where he comes back here to London. I sincerely appreciated what he done and got his permission to use the photo.

I have always wanted me or any other cluster head to be interviewed by Sanjay Gupta on CNN about Cluster Headaches. And trust me. I have tried....but I was very humbled to be interviewed here at home by our local news. Here is the clip. CTV NEWS

A very popular TV show is Trailer Park Boys here in Canada. It has gotten huge traction globally and has been running now 11 season. One of the characters on the show "J -Roc" has been an acclaimed actor for many years. He has also been busy doing a pod cast with Jeremy Taggart, the former drummer for "Our Lady Peace", a huge Canadian rock band. The two discuss all things Canadian on their podcast called "TaggartAndTorrens".  It has gotten great reviews and has a solid following with music, comedy and all things for the love of Canada. Well I wrote to Jonathan Torrens and shared my story. I never thought for a second I would be spoken a I was going to be spoken about. I was just sharing my story. Well not only did Jonathan Torrens bring up my story on air. He took the decal I mailed him and snuck it on set for episodes 2 and 4 of season 10 of Trailer Park Boys. So yes if you seen it, that was it. I was fortunate enough to meet both of them on a cross Canada podcast tour. Jeremy Taggart is a migraine survivor himself. Having played concerts to over 20,000 people+ puking his brains out banging on drums. So much respect.  Both these guys are top shelf guys. I am proud to call them friends. Here is the episode. On  at 11 min 30 sec PODCAST TaggartNTorrens


The Trailer Park Boys have also their own network called "Swearnet". Its a subscription based web that I and many others who are fans of the show go on.They do many skit videos including a mail bag and state of the union address to fans. Some videos end up on YouTube over time. As members get preferential viewership because of a paid membership. I mailed in my decals for a video session of "Mailbag" , a skit where they open fans mail. Nothing is pre opened. So they opened my decals on air. Was so cool. In the letter I asked if they could use on set for season 11. (airs next year). So we see. Also during a filming of "State of the Union" Robb Wells who plays Ricky wore my shirt on cluster headaches. Very cool. I also heard from a friend that Mike Smith who plays "Bubbles" wore the shirt on his own time directing. He chose to wear that shirt out of his closet that day. Meant the absolute world to me he would advocate for us. I am beyond Humbled.
Id like to add. Mike tweeted a photo of the cluster head decal and as of now has 36,000 views and counting! Way to go Mike ! I was very fortunate to have finally met them in Toronto. I had to have a buddy come with me because I been fighting hard this summer and needed the safety of a friend to go. Mike and Robb said "Hey we know who you are and you do great things". I tried to thank them for what they have done for cluster heads but they thanked me and gave me praise. I was uh uh uh thank you. I didnt expect 2 of the bigges Canadian celebrities to know who the heck I am but they did. I was humbled. Loss for words actually. And very grateful. Got a ton of pics. They said they would continue to help. So awesome. I have Leigh MacInnis to thank, Shiela, Josh and the boys.

One of the characters from Trailer Park Boys Leigh MacInnis who plays Don/Donna on the show is a huge advocate for psychedelics. He went to Peru to film a documentary on Hullucingenics. Leigh and I became friends and I have been supporting his journey. During his filming of the documentary (hasn't released yet but soon). He wore the cluster suicide headache shirt and gave a shout out during the documentary and has been interviewed telling others the medicinal help behind psychedelics. Leigh is a really kind man who has been nothing short of a hero helping us spread awareness. My video is on his website Trippin With Leigh Please support Leigh when his documentary comes out. He will be filming more of these. We should support him as well. He is a good guy.

For the gear heads who follow the TV show "Street Outlaws" would be familiar with 'FarmTruck". That truck is world famous truck and is well known in the automotive world. He was kind enough to sport the decal on the truck.


A while back I started watching Verne J Troyers youtube channel. aka Mini Me. As a fan of Austin Powers movies I am a fan of Verne, Verne worked with Daniel Radcliffe. I only found that out after I mailed Verne. Verne was kind enough to support and talk about CH but also take the decal for his scooter.  Verne is a pretty kind humble guy. Appreciate the support Verne and thank you.Here is the episode Verne J Troyer Maibag #5

Despite all the success I have had with what you see I did not always have positive replies. But it doesn't matter to me. What matters to me is people helping people. People being kind and supportive to other survivors and their families. This disease is bad and it affects every single family member as well. So today I thank every single person today for assisting in awareness. Famous or not. We all play an integral role by creating awareness. Some just have a bigger audience. If you ever meet any of these celebrities. Please thank them for accepting awareness. And don't think for a second since they are celebrities that I don't care about us average Joes, because us survivors to me are the most important. You are all important. You all matter and I love all of you. Pain Free Wishes and I will keep advocating for all of us my cronies. 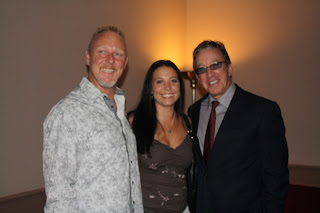 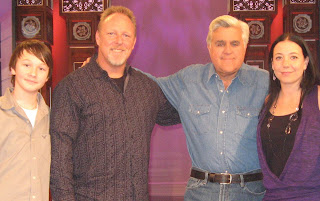 On stage of The Tonight Show - Jay Leno 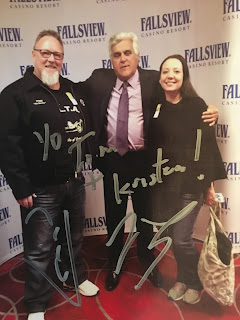 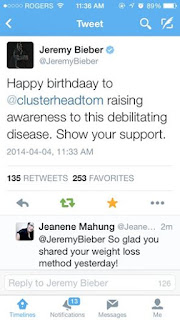 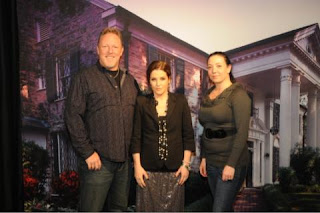 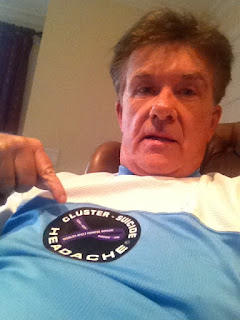 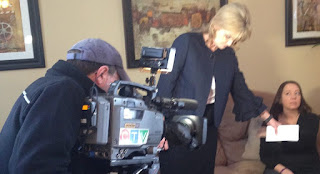 Wife about to be interviewed on CTV news London 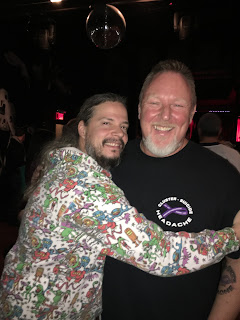 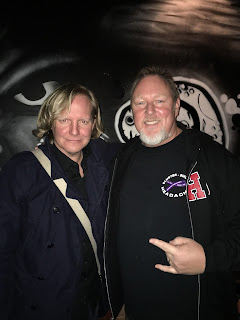 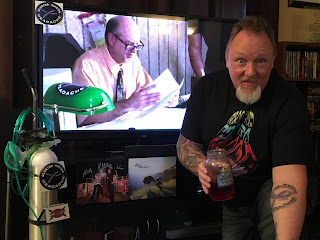 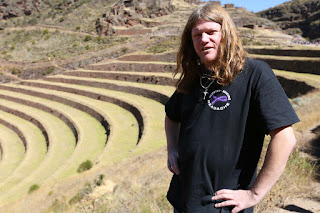 Leigh MacInnis-actor on Trailer Park Boys and Documentary on hullucinegnics 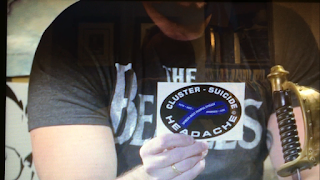 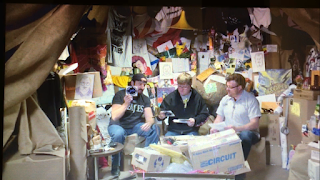 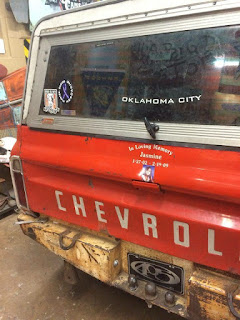 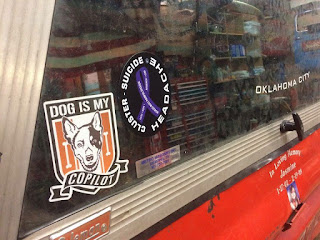 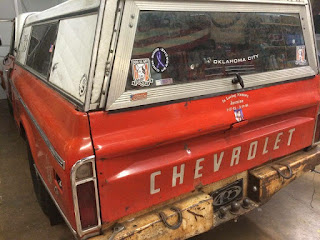 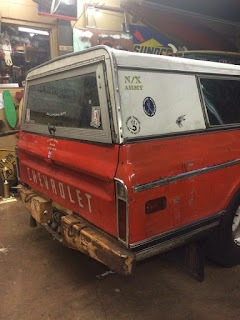 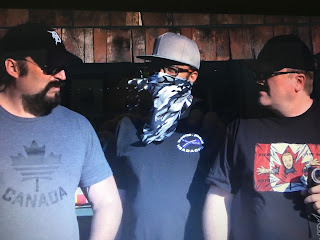 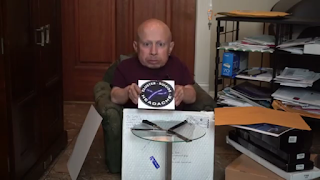 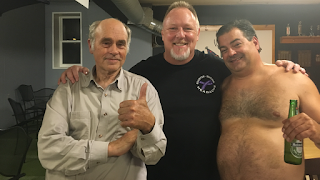 John Dunsworth me and Pat Roach
Mr Lahey and Randy 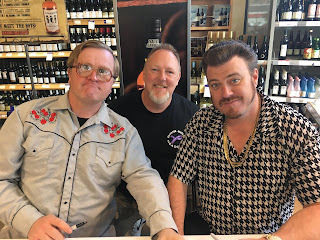 Posted by ClusterHeadSurvivor at 11:03 AM