Last night, was absolutely one of the hardest days of my life. I dug a grave for my dog. Mans best friend. My Buster Boy.

Who would have thought for a second my morning ritual of waking up, stepping in pee in the kitchen, lifting him outside and making his breakfast would be his last.
How would I have known that when he lost it, that in a few hours time, he would have passed away and then be buried? My heart is broken, my wife and sons heart is broken. We will be grieving for a long time.

This is Busters story.

About November the 18th 2012 I had come home from brain surgery. We had friends over that day visiting me and my wife had to work so as everyone was getting ready to leave. My wife came in the house and asked me to help this little dog outside as she could potentially run him over.
With assistance I got my shoes on. ( remember I just got home from a very invasive brain surgery so I was really unwell to say the least). We all went outside.

Here stood on m driveway the cutest yet smelliest scary looking dog. He was so friendly, wagging his tail. It was very evident to all of us he had been homeless a very long time. His hair was dread locks. Literally so long that the shear weight of his tail he wouldn't lift it to wag. It swept on the ground like a broom. His hair was yellow. He was soaked in urine and feces. He has worms, his mouth and chest was stained from rotting teeth. When I picked him up, all I felt was bone. He was so skinny. I ran and got some food from my other dog. He ate it so fast. Since  I was unable to drive, let alone put my own shoes on. Our friend took him to Animal Care and Control here in town.

I wouldn't stop thinking about him. How he got where he was, how bad his life must have been and how bad shape he was. It was really heartbreaking anyone could do this to an animal. I spent days checking Pet finder, kijiji, local paper, and called Humane Society, checked the neighbourhood mail boxes etc. Looking anywhere I could for a posting of a small white dog. At first we thought it was a poodle mix.

I called Animal Care and Control and asked about him. They were reluctant to tell me anything since I wasn't the person who dropped him off but explained I had brain surgery and couldn't' drive and that it was my house he was found at. They said well he has been homeless 3-6 months. His teeth are severely rotten and needs extensive dental work, He has been de wormed and de flead. His age is 9-11 years old and he is severely sick and malnourished, going blind and deaf. He is a Bishon Frise.Chances are very high he will be euthanized. We had saved his life that day because it went below freezing 2 days later. He would have froze to death if we had not taken him that day.

The law states that the owner has 5 days to claim him before he is put up for adoption or euthanized. That night my wife and I sat down and I begged her that we rescue him. Literally it would be a rescue as we could him on our lawn. Like he was supposed to be there. It was our house he choose.

I checked online and checked around. No one was looking for a Bishon let alone small white dog. Nothing no where. I waited the 5 days. My wife and I had not been looking to adopt another dog nor could we afford another animal.But this little guy must have been through hell. The vet agreed that he was LONG neglected before he became homeless. That teeth don't rot that fast. He was severely neglected and abused.

My wife married me 2 months before brain surgery. She never gave up on me. We were not giving up on him. I called Animal Care and Control on the 5th day and went and brought him home. And home is where is RIP forever.

From the minute he was home. He was  family. Any pet owner will agree, that animals are family. We certainly had our work cut out for us. Since he was frail and in his elder years, teaching him sit, speak, shake a paw was out of the question. Our concern was getting him health. Over the course of 2 1/2 years we had him. He had a total of 10 teeth removed. 7 1st time and 3 second time. We went almost a  full year of trying so many different food only to find out in the end he was allergic to everything and was a vegetarian.
He had well over 250 vet visits. There was countless times we thought it was his time and he would bounce back.

It took a week and he didn't say a peep. One day mail man came and his first bark. From then he would run and sit on the top of the couch to slowly having trouble with arthritis that I had to carry him up and down steps. His last month here he barely made it around the block on a walk. It was to much for him.
He used to sleep with us until he had a few accidents on the bed and then we kept him in the kitchen in his bed. We tried a few times to bring him up again but he wanted his bed. That was his spot. We had the softest of blankets possible and made it  as comfortable as we could. He and  our other dog were so reliant on each other that he would cry if the other dog had a bath and he couldn't see her. Or he would wait until she came to the door to go outside. They were like peas and carrots from day one. He truly was more than just a dog. He was and is always family.

It was no secret that Buster was my dog. I mean he was the family dog but Buster and I had a special connection. whether it was licking my face to death or just being my shadow. Some days I think I should have named him Harley because he cost us one for sure. We spent north of $7000 on him and I do not regret 1 penny. Mind you I'd like to find the previous owner send him a bill and tell that person what a  low life piece of shit they are. Then again....Karma.

Our life really revolved around Buster. We no longer did trips past a couple hours. Where the other dog could easily be left for 4 hours and not have an accident. Buster could only go 1 hour. He was so high needs. But, so am I. My family never gave up on me because I am sick. So why should any human do the same to an animal? Sadly people do :(

Dogs sense and know so much. More than people give them credit for. When I had my attacks. Buster would always come over and lick my face. He was never scared as I yelled in agony screaming wanting to die. He would just come over and love me. Unconditionally.

His name Buster came because that is what I felt he was. He wasn't afraid of nothing. Not thunder, not rain, bad snow, nothing. He did not have a mean streak in his bone and loved everyone. Every animal he encountered, every person. He was severely going blind at the end. Deaf too but his nose worked perfect. I believed his memory and smell got him around the house and people.

His health had been deteriorating with incontinence. He absolutely hated being alone. It was literally the only thing that dog hated. I couldn't even go do laundry without him crying because he wouldn't walk down the stairs. Some days he drove us nuts. But it didn't matter.

A few times in the last year he had freaked out. When I aye freaked out he would yelp for no reason, loose all bowl control, run in circles, running into everything and go ballistic. The first few times it only lasted 5 minutes which seemed much longer than it was. It happened over a year ago in the car. Once in the back yard (neighbours must have thought dog was dying) and then again the other day and sadly yesterday his last time. It was very obvious it was neurological. That a pill couldn't fix this. And Buster could not tell me.
Each time I bear hugged him and yesterday he soiled himself all over me. He literally ran into the walls, hurting himself. This time he yelped for  20 min. Then he ran in the kitchen full speed panting so hard his body temp gave him fever and he was panting so hard I  swore he would have a heart attack. This continued for  25 min. Nothing I could do to help him would make him calm or stop. I called the vet. I was barely able to get him there to drive and stop him. I called my wife. She left work and came immediately, my son came right away.

I asked our vet Dr Mor if it was his time. he gave him a shot and it calmed him down so much, he went limp in my arms. He wouldn't even hold his head up. His tongue hanging out, slow breathing. He was lifeless.
My wife shown up as I sat outside the vet crying holding him.
Then my son came.

It was closing time and I felt bad for the staff. Not only having them stay past closing but watching us all sob.
We brought him in the room. He laid on the table and he passed away. It was the hardest thing I have ever had to do. We brought him home. And that exactly where he will be . Home. Because this has always and will forever be his home.

Thank you for rescuing me my little buddy. 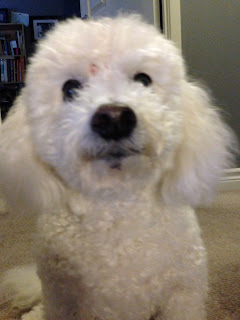 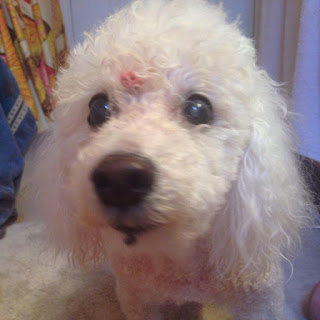 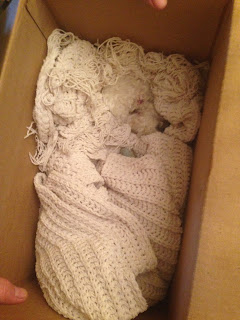 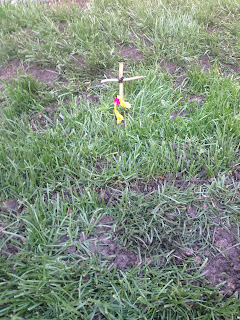 
Posted by ClusterHeadSurvivor at 8:54 AM