I loved a friend I never met.

I get contacted from people from all over the globe. Whether they have cluster headaches, migraines or just another rare disease and health issues. Yes, I am contacted by all sorts of different people.

So a couple years ago a
gentleman contacted me and noted on one of my videos he has a super rare skin disease. Being a person with eczema, being born without skin from the waist down and having skin problems I definitely could appreciate where he was coming from until the moment I took the time to find out what this gentleman goes through.

My disease is fairly rare, very painful but there are times I suffer less and its not severe. I also do not look sick. I can walk into a room of strangers and no one would know unless I am hurting. This gentleman went through his entire life without opening his mouth and everyone knew immediately his health.

This gentleman's name is Peter Hiscock. He has Lemaller Ichthyosis. Peter was the oldest living person in Canada and only 1 of 7 people in the entire province of New Foundland and Labrador.
Peter was 33.

Peter from day 1 was nothing but a first-class friend to me and pretty much anyone who ever came into his life. While people would stare at him, make nasty stares or comments, the only thing I ever saw was his gigantic heart.

Peter loved many things. The Toronto Maple Leafs. cars, singing and just trying to make a difference in this world and that is exactly what Peter did. He created awareness on his YouTube Channel, on Facebook and his Mustang the Ichthyosis Warrior machine! He really wanted to earn enough money to attend a conference in Nashville, where people who have the same skin. It is pretty surreal to be in a room full of people with the same disease and not have to prove how sick you are. Peter and I have spoken many times and deal with some things together.

Peter was the type of guy who's smile would light up a room. Peter wore his heart on his sleeve and if you have ever heard of "Maritime" kindness, Peter was the pinnacle of kindness and love. In my 46 years on this earth. I have never encountered anyone who is more pure, more kind, more loving than Peter. The ONLY thing I ever have seen Peter do was want acceptance, and to be treated like everyone else and spread awareness. And that he did.

With me being sick, Peters health and a HUGE distance away I knew the odds of actually meeting him face to face was slim because I live in Ontario and he was in New Foundland. The weird part is that Peter and I spoke to each other with understanding and respect. Which turned into a mutual love for one another. Yet I have never physically met him. It is weird but beautiful to have a friendship with someone that you just admire.

Peter suffered immense pain in his entire life. Different pain than me but none the less severe chronic pain. He never once complained to me. He didn't have to. And even in the days of struggling. he would still smile. wish me well as he knew I was hurting.

There is something about us sick people when around other sick people is that we get one another. It doesn't have to be the same disease or life but we just get it. It's surreal.

Peter was pretty consistent with vlogging on YouTube and I had stopped in 2018 because of my health struggles, it was just too much. Peter had slowly started stretching out his videos and his final video he admitted he had been struggling badly and wasn't well. I cried watching it. Here is a man who barely lived at birth, spent 6 months in an incubator. Thousands of trials for medications, pain reduction and only ever trying to have a better quality of life now plagued with cancer. Pardon my English but for fuck sakes. My friend Peter suffered from the moment he entered this world to the last day. Yes, it's not fucking fair and it broke my heart and everyone around him.

If you knew Peter, you knew what purity was. If you ever had a doubt that there were shitty people in this world. Peter was the one who gave you hope that there is more love and kindness in this world than evil. Peters love was just that. Love. I feel so fucking grateful that for a nano second in my life that I got to be his friend for that time. Peter made such a huge difference in this world to me and anyone who knew him. I refuse to remember all his pain and suffering and think of Peters infectious smile, his passion for cars, music, awareness and just one loveable guy. I wish we both lived in the same town because Peter and I would have been close. Actually, Id like to think we were.

Being that I am a flight away and his parents do not need 2 sick people in the house. I wanted to do something special for Peter. Mailing him a gift was pointless. He was way to sick to enjoy anything Id give him. So how can I make a friend smile? Well. I thought outside the box. I have a couple celebrity friends. I also am the type of guy to hate and never ask for favors. I thought to myself I am going to ask a celebrity friend and burn a bridge or make a dying man smile. I contacted Mike Smith aka Bubbles from The Trailer Park Boys. I know Mike gets asked for favors all day long. What celebrity doesn't? I was scared to ask. But Mike jumped on board and asked how he could help. Mike made a Happy Birthday video for Peter. Mike, you are one kind human being.  Luckily there was a  moment before Peters passing where he was able to view the video. It made Peter happy and I was so grateful for that. Mike, I owe you one.

Peter and I talked any times of death, being sick, purpose in life and what happens to us. He only ever wanted to make a difference. But he was extremely tired of being in pain. Well, Peter, you did and then some. I am a better person for knowing you and you will hold a place in my heart forever. His famous words to me and everyone "Peace and one love"......

Peter Hiscock made a difference in my life. I will miss you, my friend.
Godspeed and rest easy my friend. 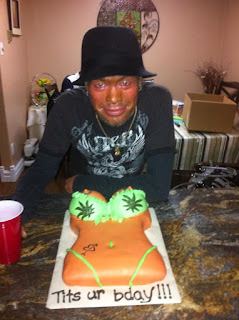 Posted by ClusterHeadSurvivor at 6:02 PM