The title speaks volumes, doesn't it?


For a decade now I have been an advocate and raise awareness for a disease I have cluster headaches. I also have an acquired brain injury from brain surgery And suffer tremendously in chronic pain with many types of headaches and pain in the body. You can read other blogs about it. This blog today isn't so much about me per say.

I have blogged and vlogged about the homeless too. Today, this blog ties the two together,

For a few years, my wife and I been trying to help a local homeless fellow by the name of Paul. He is in the early to mid 70s and not what many assume.

He doesn't drink, smoke, do drugs that we know of. He doesn't panhandle. He doesn't steal. He makes money by collecting pop cans and taking them to the local recycler.

Paul may appear socially awkward and physically unkept. But decades of living in the cold harsh winter with no heat, running water will do that to a person. He is about 6ft 3, and maybe 120lbs soaking wet. I know bad analogy.

Over dozens of times we have had personal interaction with him, Paul has always every time turned down our help. Except for a ride on Christmas Eve and a dinner we brought him.

There are lots of homeless people in this city and yours.  One would assume he could go to the mission and stay there? We asked. He prefers his privacy, feels more self-reliant and has no fear of being robbed of his soap. The missions are full all the time and where he stays is a very long walk.  He has been robbed many times and sadly some youth knows where he is and steal or damage his things.

I have shared Pauls story verbally and many have said. Get a job ya bum. You are living off the system. Or They are all drug addicts.

Sadly many street workers with fake homeless signs, young healthy window washers ruin it for the actual homeless who ask for nothing from no one.

Many mental health hospitals close up, close departments and these people with mental disabilities are thrown on the street and end up using drugs to live with whatever is going on inside them without proper treatment and care from a physician. And end up using drugs.

It is also very true but people lose focus on the fact that some people fall on hard times. Lose a job, their home, and family. And have never done drugs, or even drank!

Yet society puts all the homeless into one group, calls them addicts and a burden.

I am sorry to inform you....I could be Paul and so could you. Nothing is forever. The richest have become the poor too. Not every job is secure and especially your health. I learned that in my early 30s. I got sick very young and my health has declined since then.

Imagine having what I have and being homeless? No medicine cabinet, no warm bed, no one to run and get meds for me? No one to cook for me when I'm too physically exhausted to even cook?

I can not in good conscience sit down on Christmas Eve to a big turkey dinner when there is Paul and many others sleeping on snow or dirt.

My wife and I do not do much but we make an effort to help. And we believe if everyone was a tad proactive, a little giving, it could help someone.

It is also an excellent chance to give 100% to someone instead of handing money to a charity that gets siphoned through CEO's first. What we give is 100%. No middleman.

It is very important you share the video. It may help a homeless person.

Do not thank us. Be inspired only and be proactive. 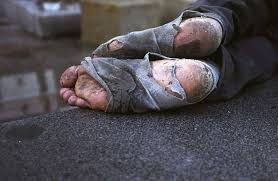 Posted by ClusterHeadSurvivor at 8:04 AM

Email ThisBlogThis!Share to TwitterShare to FacebookShare to Pinterest
Labels: homeless