Why am I blogging with a vlog about the homeless?

It could have very well happened to me and you. I have seen with my own eyes people I used to work with living on the streets. Factories close, people lose their home because they can't pay their mortgage or rent. Marriages fall apart due to job loss, health, addiction, mental health, and getting sick like me. And yes people can become homeless for some of those reasons.


While my wife and I help the homeless some are appreciative of what we do and others are quick to judge " They are all addicts or junkies". Yet when we explain that more than half maybe closer to 80% of the people we help that we have NOT seen them beg, panhandle and almost always refuse. But very appreciative.

I believe they are not the problem. Homeless are the result of the problem. It doesn't matter why they are there. Just that we help them.

This could be your mom, dad, brother, sister,  relative, childhood friend, old neighbor. Could be someone you know. Last night was below -20 with the windchill here. Someone went to sleep cold and hungry. And if you don't think it could happen to you. You are delusional. I got sick at age 33. No one plans to be sick that early in life. I lost my health, my career, and much much more. I do not drink, I do not do recreational drugs for fun, I do not smoke. I do not borrow money from friends etc. And the income I live off is minuscule compared to my old income. Here if you make $25 and hour and go on Employment Insurance you max out at so much per week. Whether you make $25hr or $500 an hour. You are still maxed out on EI. If you go on Social Assistance. Doesn't matter what you make. It is 1 amount. Period. I myself have never once in my life been on Social Assistance. Because prior to getting sick. I always worked or was laid off looking for work. I do not know what Social Assistance pays but it is not much If you have a home and a mortgage. Chances are you won't be able to pay your mortgage and food, insurance etc.

So what happens when you loose your job or business and you are young with no financial savings? or if you get sick at a job with no long term disability plan? You are now before old age pension but too old to find work? Yes, it s a young person game out there. Now, what? You spouse leaves? What happens?  Average apt here is $900+. Social Assitance doesn't even pay $600 I do not think.

Becoming homeless is easier than you think.

Now try being homeless and you are sick.Whether it's physical, or mental or even worse both.
Try being sick with cluster headaches. Worlds most painful disease. Imagine having an attack under a bridge trying to find shelter from the cold and hungry with no medicine cabinet.

19 people died in my city last year from being homeless. That was counted. How many more unaccounted for?

The VLOG you are about to watch is hard to watch even for me. I tried hard not to disclose faces and point the camera away from others and those I interacted with I did not film with for the privacy of their identity.

For last couple years my wife and I been helping 1 individual as much as we can. He has a name. It is Paul. Paul is 72 years old. He is about 6ft2 and probably weighs maybe 150lbs. He barely has any teeth. His voice is unstable as his walk. This year he has deteriorated gravely.  From our first interaction with Paul, seeing him around to last night he always refuses help. Will not take money, food, clothes etc. Only Christmas Eve of 2015 he took a turkey dinner we made. At the time Paul was in a different location but same type of shelter. Wood Pallets, tarps on top. Leaves packed around the sides. More blankets than you can count. No heat. no bathroom, no fridge, no medicine cabinet. NO FAMILY.  We have never seen him stand with a sign ask for money. Never seen him beg, steal or cause a problem.  In fact, I was sitting in my office and heard what I thought was a raccoon in the trash. It was Paul getting pop cans. Next day I saw him walking to the scrap metal recyclers and know now that's how he makes money.  His clothes are frayed. He wears a women's navy type jacket. He is unshaven, missing teeth, frail. I don't see anyone hiring him. His walk is so slow right now, he almost causes an accident trying to cross the street. Last night it was -21 with the windchill.  Try sleeping outside at 72 years old.

I have a real heightened sense of smell. In all the times I have seen Paul and even given him a ride, he has never once smelled like any alcohol. He has always been coherent. He doesn't smoke.
Last night we found him because we been looking for him since Christmas when we gave him a ride. We have him a Hope bag filled with things to help him out. While driving it broke my heart to listen to his frail voice. Watch VLOG 38 to see us pick up Paul. So we went home and next day packed a large bin full of clothes and went to the store and got him things he could use.  Since then we have been looking for him sometimes driving by or to his shelter trying to find him. Either he wouldn't come out or he wasn't there.  Thankfully yesterday some friends of ours that work near him seen him and said he is inside the McDonalds across the street. We drove over and sure enough there he was.
He invited me to sit down and no matter how much I offered to buy him a meal, give him the bin full of items refused. He wanted no help, no money nothing. He just said how cold he was.
His boots were cut off at the toes from the laces down. His feet were hanging out literally. Socks on one side and a plastic bag on the other. He had a mitten on right hand and a sock on the left.  He looked like he was wearing at least 8 sweaters. All he said was people steal my things, please keep it until the spring when the snow is gone so I can hide it. He thanked me. And said he had to go and buy cat food. He has a stray cat that lives with him.  He keeps his sock on his hand and mitten because his fingers are black and frost bitten.

As we both got up to leave I couldn't help to feel helpless for him and almost guilty I couldn't do more for him. He is someone's someone.

I know we can't save the world. I know we can't change his situation but we can give him hope. For the thousands that pass him by on a daily basis, he s a human being.  And should be treated as such.
For all the wrong meals I have gotten from that McDonalds over the years I have a new found respect for them letting him keep warm,
Thank you.

Literally, as I am sitting there with Paul. Two guys sit next to me and start panhandling me with a BS story. While eating a big mac giving me the gears about oh I need money to get back to St Thomas (20 min car ride)because I was in town for a funeral. I'm like really? You are eating a big mac meal, eavesdropping my offers for help and then starts panhandling us as a man has no tops of his shoes? Are you kidding me?

And that is why many do not want to help the homeless because of a con artist like that. So you have to use your best intuition when helping the less fortunate.

As we sat on the couch and watched a movie, with the heat on, food in the fridge and a warm bed. I knew Paul was struggling to stay awake at Mc Donalds to keep warm until he needed to sleep in the -21 temps last night in the snow. It will be a miracle if he see's spring.
If you are sick like me with cluster headaches and all the other chronic pain I deal with. If you just have pain or whatever. Imagine being Paul. No family, no real home, no medicine. Just ratty clothes on your back. In pain. Sleeping in the snow. I do NOT  think I could live homeless with cluster headaches.

Please help the homeless directly. DO NOT THANK US. We will not accept any praise or kudos for what we do. Being and inspired and doing something about it is thanks enough. And helping the homeless is what we would like to see.

Here is the VLOG. If you want to hear Paul as we give him a ride its VLOG 38. The photos is Paul's shelter. My sign reads #HOMELESS MATTER. 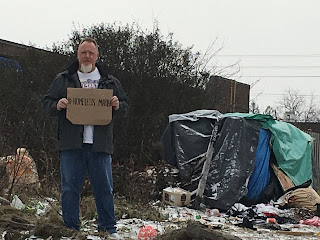 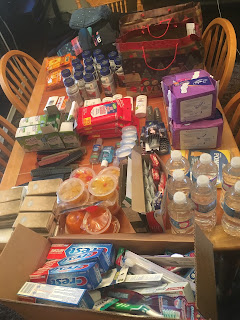 Making hope bags to give away 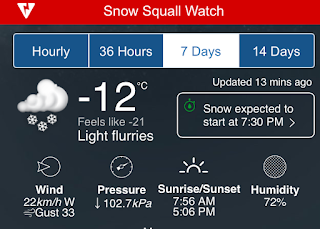 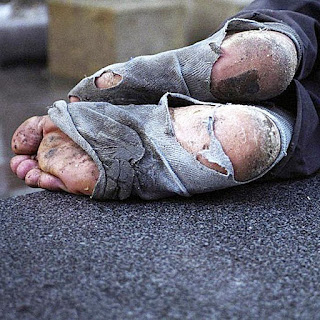 Posted by ClusterHeadSurvivor at 9:40 AM