Trippin' With Leigh Documentary on Swearnet.com

This blog today is about the multi-talented actor and singer Leigh MacInnis who also happens to be my friend. He is known for his hilarious portrayal of the character's Don and Donna on Trailer Park Boys seasons 8 to 10.


Like many, I saw Leigh as "Don the Spiritual Bastard" on Trailer Park Boys. And laughed hard. His character almost to me is in some sort of personal connection to Leigh as he likes to partake in the psychedelic word of hallucinogenics. And then later as Donna. No Leigh did not play a transgendered person. His character truly was someone with a split personality. Either character he portrayed gave us fans many laughs and we enjoyed seeing Leigh do his magic on screen. As well if you are a hard rock fan you can go on youtube and watch Leigh sing. He is awesome.

I first reached out to Leigh because I heard he was doing a documentary on psychedelics. And as you know from reading this blog I use psilocybin to treat my cluster headaches.

I am sure Leigh has had thousands of people contacting him regarding his music or acting on Trailer Park Boys but I highly doubt many were contacting him to tell him about the world's most painful disease known to medical science. Well, I did. And at no point did I or any other cluster head patient on their behalf was I trying to convey getting pity. I have not contacted any celebrity for that matter to seek pity. I am not like that. I do not want anyone's pity.

I was a little shocked but Leigh was very interested in hearing what I had to say. I'm sure many times his emails are a pretty carbon copy for thanking fans for the show and his music. And that is cool but Leigh took interest in hearing my story of 4 brain surgeries that gave me no relief from cluster headaches yet Magic Mushrooms does.  I explained to Leigh it wasn't something I had done growing up, having a wife in recovery and that it was my last option,  Leigh was very receptive and like any true Maritimer I have become friends with, extremely kind.

Leigh was getting prepared to leave for Peru for this documentary with a film crew. I had tried my absolute hardest to help with crowd funding for Leigh to make this happen for him. He said if I could get a shirt with the cluster suicide logo on it to him he would wear it. I literally jumped in my car, ran to the post office and had it shipped as fast as it could get there as he was leaving on a Monday I believe. I was sweating the entire weekend worried he would miss the mail delivery.

As Leigh was leaving the mail came as he was leaving his home. It was meant to be. I never in my wildest dreams thought for a second Leigh would mention anything about me. I sent him the shirt to support him, be appreciative of what he was doing. How his documentary is to open the minds of people. Not about getting high for fun. It is about the psychosis of people'ss brains. How it's a healing tool not only to get people of bad drugs but also help people like me who are neurologically sick. It is a known fact that it helps people with Post Traumatic Stress Disorder which I have from brain surgery.

I got sick at age 33. Something no one in life plans for. We all think we get old and eventually end up with some sort of ailment. But not at age 33. No one thinks that. And the last 11 years of my life have been such an incredible ride that would blow most people's minds without tripping. From having my head drilled into awake,  finding someone to love me for all of me, getting married, psychedelics and this. To be perfectly honest. I should not be alive. I shouldn't be here. If I followed through with the statistics of suicide and cluster headaches I should be dead. That's a hard reality of this disease.

Now if you are a Trippin with Leigh Fan and just reading about this for the first time. Well, Cluster Headaches is the world's most painful disease known to medical science. I do not say that proudly. I wish if I did get sick my disease could have bene 73rd on the list. I didn't want to be #1. There is no exaggeration to the pain, wanting to die to stop the pain. Cluster Headache survivors will do anything to stop the pain. Have their head drilled into awake like me, Your body becomes a funnel for any and all prescription medications no matter how toxic they are. And if you are stupid like me. Wait until the end to try psilocybin and get some relief. It may not work for everyone but it has something like an 85% success rate where drugs and brain surgery is less than 50% success rate. One surgery I almost died.

Leigh and I have become friends and I'd like to think he knows I'd do just about anything for him. It's funny how many celebrities I have met in my life and by no means am I a celeb hound or pic collector. But one thing I can affirm that there hasn't been a single Trailer Park Boys cast or crew or friend that I wouldn't have sit at my dinner table with. Every single one of them has been so kind, so helpful so nice. It is on my bucket list one day to go to Nova Scotia and be on set and see how beautiful the Maritimes is.

So Leigh travels many planes to finally arrive in Peru with his film crew and trust me Leigh has done his homework on the medicines of Peru. It is not just something you arbitrarily take and trip out on. There are certain safety procedures that must be followed prior and during to ensure safety. And since he has more experience with this than anyone I have ever met, he knew full well what he was going to partake in.

I encourage you to watch this documentary on Tripping With Leigh. Open your mind the natural medicines of the world. What god has given us grown from the ground is not only to explore our minds and should be used to heal the sick.

Stay tuned in the future for more Tripping With Leigh in different countries. And if you ever have the opportunity to meet Leigh thank him for what he has done for us that are sick. 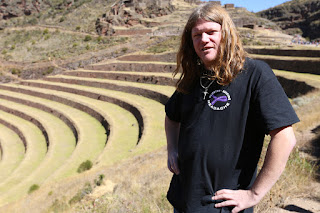 
Here is a VLOG I did on Leigh, Swearnet and The Trailer Park Boys, filmed Prior to Trippin'With Leigh release, VLOG click here

Posted by ClusterHeadSurvivor at 7:13 AM